A while back when I was still an employee at Ps arkitektur, I designed these signs.

Our client had a long history of conflicts with the Swedish ministry for traffic. Ever since they decided to cut down a large number lime-trees making out his 400 year old parkway, in order for the E4 highway to run trough it. He had found a loophole in the law of ownership over the land closest to the highway and had decided to “rebuild” a couple of lime-trees in the shape of commercial signs. Some of the money from the income would cover the cost of restoring the remaining trees in the parkway, suffering quite bad from decades of road pollution.

The signs themselves were to resemble lime-trees in order to turn into a memorial for the trees lost to the highway. So I studied trunk constructions and lines of lime-trees, and came up with an abstract pattern, that was later laser-cut out of sheet metal. We chose corten, to give it a warm coppery shade of rust. The beams and the bole were also an interesting story that took a lot of mind work and time to figure out. Luckily I worked close together with some brilliant engineers that calculated everything perfectly. 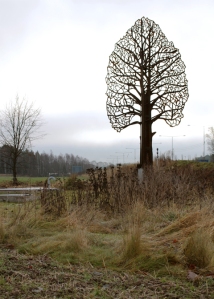